We are supplied with the binary ./rip and also the source code rip.c as well as a Dockerfile.

This looks like like a pretty standard ret2win-challenge with a gets-vulnerability and a win-method that spawns a shell.

We can see that there is some code in there to throw us off.

But typing in the s3cretp4assw0rdyo-password doesn’t do anything interesting.

We’re dealing with a program with no PIE (Position Independent Executable). That means that the addresses inside the executable are going to stay the same between multiple systems and multiple runs.

Address of the win-method is 0x4012f4 as seen using objdump.

We can also get the address in our Python-script using pwntools like this:

Now we need to perform a buffer overflow on the gets-call. That way we can find the offset we need to place the address of the win-method on the stack.

The buffer in the program has a length of 100. Let’s create a cyclic pattern of 150 chars:

Now let’s run the program in gdb and have a look:

We get a SIGSEGV as expected and we can see that the stack is overwritten with our cyclic pattern: 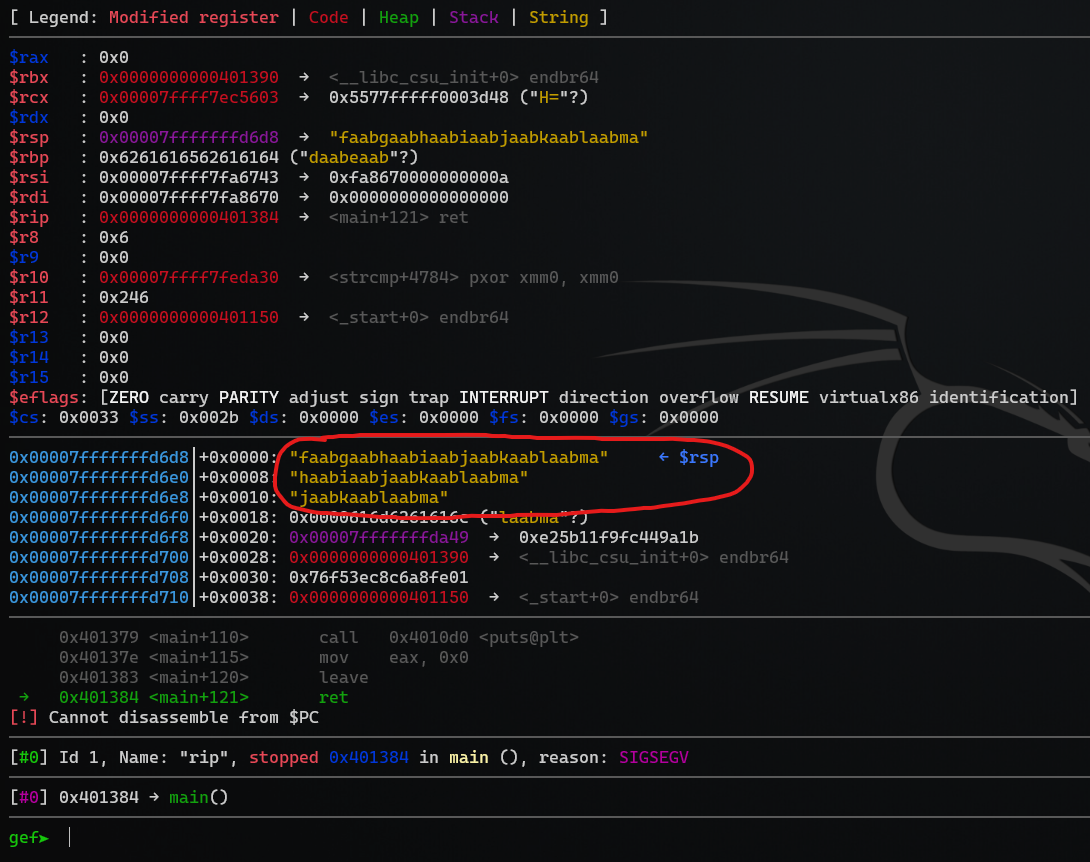 When the ret-instruction at 0x401384 is executed, the program tries to return to the address at the top of the stack. That means that if we place the address of the win-method where we can currently see the $rsp pointing at our cyclic pattern; "faabgaabhaabiaabjaabkaablaabma" ← $rsp, we should be able to change the program flow and retrieve the flag.

The nice thing about the cyclic pattern is that we can easily find the correct offset for our payload by using the cyclic-command again with the -l parameter and the faab-pattern currently on the stack:

The offset for our payload is 120 bytes.

Now we start to build our payload. We find the address of the win-method using pwntools. The we build the payload by padding with A * offset and the we follow with the win-address. The address is wrapped in p64 to make sure that the endianness is correct. 0x4012f4 becomes 0xf41240. This script writes the payload to the payload file for easy testing in gdb.

Verifying Our Exploit Payload In gdb

Now we try the exploit in gdb to verify that everything works. First we run disas main to disassemble the main-method so that we can find an address and set a breakpoint to inspect the stack. This is because we won’t get a SIGSEGV this time, so we have to make the program stop at the correct place.

We set our breakpoint at the ret-instruction, which is the last instruction in main. This is right before our win-address is being popped of the stack.

The address of the ret-instruction is 0x0000000000401384. We use b * followed by the address to set the breakpoint. Then we run the program inside gdb and read in the payload file. 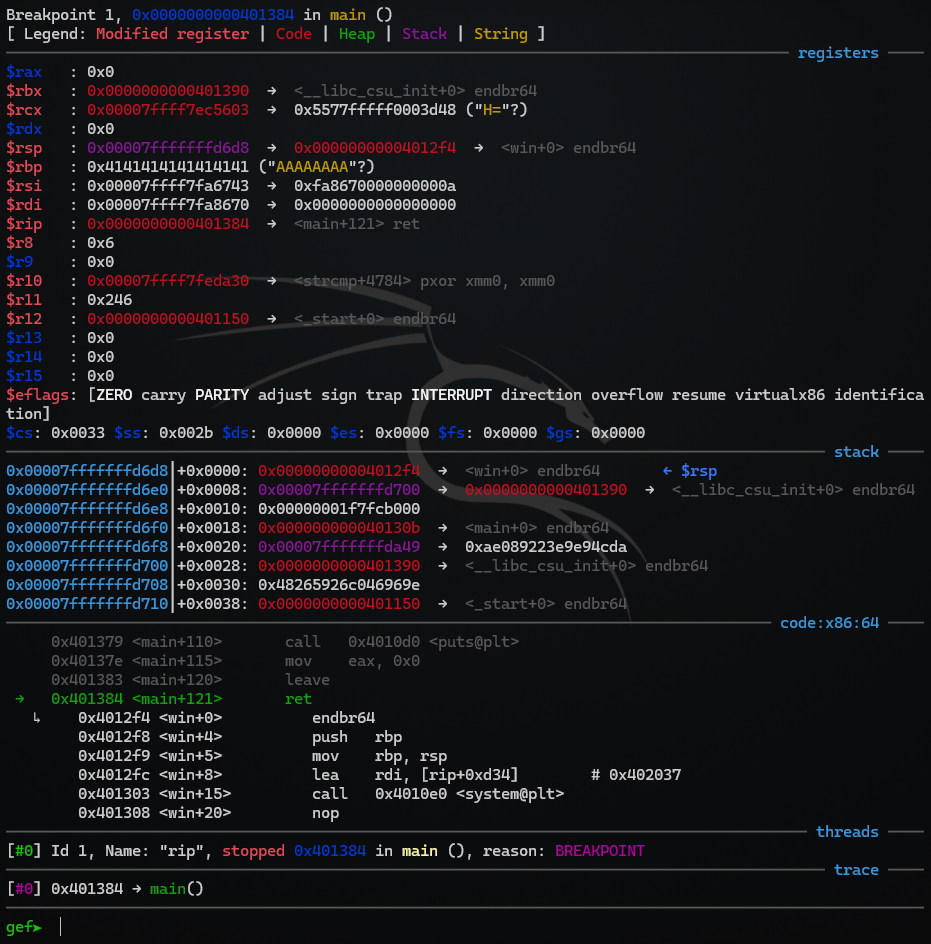 Let’s have a closer look at the stack and disassembly. We can see our win-address (0x4012f4) at the top of the stack at address 0x00007fffffffd6d8:

This is looking very promising!

However, if we type c to continue in gdb we will end up with another SIGSEGV. I can’t explain this properly in a technical way, but it’s some kind of I/O issue when we call into /bin/sh from win.

Let’s just test our exploit locally in our shell:

We can see the same thing, we go straight to a Segmentation fault. It’s very easy to get sidetracked here and start debugging the exploit itself, but the exploit does actually work.

⚠️ I think this is important to highlight because I’ve spent a lot of time fighting mistakes like this myself. ⚠️

It works! The important part here is the io.interactive()-call. This makes sure that our program doesn’t instantly exit and let’s us interact with the /bin/sh-process started by win.

The easy fix is to always make a pwntools-based exploit script and use io.interactive(), but that’s not always feasable, so how can we do the same thing when testing our exploit directly in bash?

There are multiple ways of doing it, but one easy way is to use cat like this:

We now see that the program doesn’t instantly crash and waits for input instead. And as soon as we enter a command we get the output back. This is because of the second cat in the (cat payload; cat)-command. cat with no arguments will just wait for input and also write any output back to us.

Hopefully this demonstration can save someone a lot of issues on the future! Now let’s move on.

Testing The Exploit On The Remote Target

Let’s modify our solve.py script to connect to the remote host instead of running the binary locally:

Our payload is the same as before and we only have to swap out one line of code to run the exploit on the remote target:

TODO: Add proper output from server (the follwing is recreated from memory):

This is where I had to do some research. It’s a pretty common issue that an exploit works locally and not remotely. There can be multiple reasons for this, but after some research I was feeling pretty certain that The MOVAPS issue was the culprit in our situation.

If you’re segfaulting on a movaps instruction in buffered_vfprintf() or do_system() in the x86_64 challenges, then ensure the stack is 16-byte aligned before returning to GLIBC functions such as printf() or system(). Some versions of GLIBC uses movaps instructions to move data onto the stack in certain functions. The 64 bit calling convention requires the stack to be 16-byte aligned before a call instruction but this is easily violated during ROP chain execution, causing all further calls from that function to be made with a misaligned stack. movaps triggers a general protection fault when operating on unaligned data, so try padding your ROP chain with an extra ret before returning into a function or return further into a function to skip a push instruction.

This is the issue we’re experiencing here. Our exploit works fine on my Kali Linux-instance, but fails on Ubuntu 22.04, which our target is running. In this case we know what OS the target is running because of the supplied Dockerfile:

It’s a good idea to always test an exploit on the same platform as the target when possible. I have a WSL2-instance running Ubuntu 22.04 and we can test it now:

From The MOVAPS Issue above:

movaps triggers a general protection fault when operating on unaligned data, so try padding your ROP chain with an extra ret before returning into a function

The solution is simple, we just need to add an extra ret-instruction before returning into the win-method.

Let’s run the program in gdb to inspect:

The answer is no. This is also a pretty common pitfall. The ret at the end of main (0x401384) is returning to the address at the top of the stack. We can see our 0xC3 at the top of the stack before the pointer to win, but 0xC3 is not a valid address. We need an address pointing at a ret-instruction, not the instruction itself! That’s when we need a ROP-gagdet!

ROP-gadgets are pieces of code within an executable that can be used to our advantage. There are multiple types of gadgets for many different situations, but in our case, all we need is a ret-gadget.

One way of finding ROP-gadgets is to use the ROPgadget.py tool:

We debug our payload in gdb again:

We can confirm that we now have an extra address on the stack that points to a ret-instruction.

The good thing is that our payload still works on Kali Linux:

Running The Final Exploit On The Remote Target

I learned a lot from this one and got the flag in the end!

In the final script we use pwntools to easily find the ret-gadget for us: